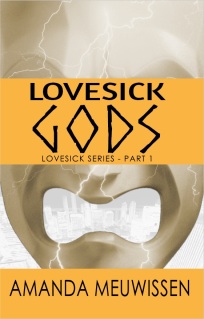 Lovesick Gods
Lovesick Series
Part One
Amanda Meuwissen
Genre: – Superhero/Gay Romance
Date of Publication: October 2, 2017
ISBN: 1-943619-33-6
ASIN:
Number of pages: 312
Word Count: 106,903
Cover Artist: Veronika Dolnikova
Tagline: Heroes aren’t meant to act like their villains—or fall in love with them.
Book Description:
The elements touch everyone on Earth—Fire, Water, even Light—but every so often someone becomes more attuned to their elemental leaning and develops true power. When an evil Elemental known as Thanatos arrived in Olympus City, it saw the rise of its first hero—Zeus. But the death toll caused by defeating Thanatos changed Zeus, who by day is young detective Danny Grant.
It’s been six months since Thanatos terrorized the city at the start of Lovesick Gods. Danny should be used to his duty behind the mask, but the recent past haunts him. His girlfriend left him, he snaps at the barest provocation, his life feels empty—he needs an outlet, any outlet to pull him out of his depression.
Enter notorious thief Malcolm Cho, the Ice Elemental Prometheus. There was a time when Danny welcomed a fight with Cho, filled with colorful banter and casual flirtations that were a relief compared to Thanatos. Even as a criminal, Cho had recognized the threat Thanatos posed and promised to help Danny stop him, but the day Danny needed Cho, he never showed. Cho was the reason so many people died that day—including Danny’s mother.

Danny decides to teach the man a lesson and fan the fire of their attraction into something more. At worst, he’ll get some no-strings-attached sex out of the deal and finally blow off steam; at best, he’ll get Cho to fall in love with him and then break his heart to spite him. Danny doesn’t expect to fall for Cho in the process, and he certainly can’t predict the much darker threat on the horizon.

The long game, Danny thought as he accepted the hand Cho held out to help him from the sofa.
Cho couldn’t have any fun with a blubbering mess, so of course he’d want to cheer Danny up. It didn’t mean anything. It just felt nice that Cho didn’t pry the way the others did. He’d never look down on Danny. He was a liar, a criminal, a scoundrel—he was the reason Danny had been forced into that
position with Thanatos to begin with—but while the rest of his life felt like an open wound, somehow Cho was a balm.
Danny made a show of changing out of Cho’s clothes and into his Zeus costume right there in
the living room. Leaving the sleep pants and T-shirt folded on the sofa, he started to put on his boots at the door.
“Interesting choice of work clothes.” Cho crossed his arms with an amused eyebrow raise.
“I’ll change when I get to the precinct. And next time I’ll call. Or text. Promise. Thanks
for breakfast.” Danny made to walk toward Cho off the rug, then gave an abortive gesture like oops, stuck now with my boots on.
Cho rolled his eyes, but he still moved closer to accept the kiss Danny pulled him into. And
let linger. And linger… Maybe a little longer than necessary.
“Have a nice day at work, dear,” Cho said, sickly sweet in his familiar drawl.
Danny found himself
smiling—and meaning it.
Cho was a bad man. He was. He…he was. But he made things lighter. And easier. And even though Danny knew that soon he’d have to end this or risk getting in too deep, for now
he could enjoy the lie for just a little longer. 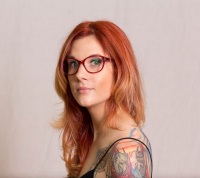 About the Author:
Amanda Meuwissen has been writing and posting online for many years, including maintaining the website and blog for the software company Outsell. She is an avid writer and consumer of fiction through film, prose, and video games, and is the author of the paranormal romance trilogy The Incubus Saga and young adult novel Life as a Teenage Vampire. Amanda lives in Minneapolis, MN, with her husband, John, and their two cats.
http://www.amandameuwissen.com/
http://crimsondomingo.tumblr.com/
https://www.goodreads.com/author/show/6831429.Amanda_Meuwissen
https://www.facebook.com/AuthorAmandaMeuwissen/
https://twitter.com/MissSuperCube

Enter to win the Rafflecopter Giveway!

I’m an absolute sucker for anything Greek mythology, and when Lovesick Gods by Amanda Meuwissen fell into my radar I was excited beyond words to read it! She has a twist on the old gods, and their relationships. I adored Danny and Cho’s push and pull relationship. Danny is bruised and battered, and Cho makes his life much more… should I say interesting? It wouldn’t be enough of a description for what their relationship blossoms into (warning: sexy times ensue), but it will leave you flipping to the next page over and over. Lovesick Gods has been one of my favorite reads in a very long time. I am definitely looking forward to Meuwissen’s next novels!