Can she succumb to the hot sting of his hand and the gentleness
of his kisses without revealing her true identity and darkest secrets? 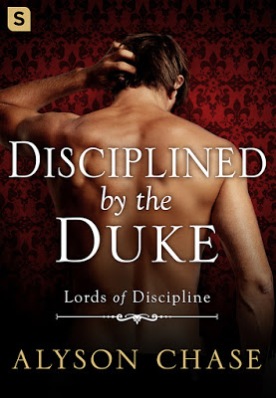 The day her sister murdered their abusive father, Elizabeth Wilcox stopped being a
gentleman’s daughter. Willing to do anything to save her sister from the
hangman’s noose, now she is a spy… A servant. A liar. A thief. A submissive.
Masquerading as a parlor maid and entrenched in the Duke of Montague’s estate, Liz is
willing to risk all to uncover the secrets that would save her sister. But
submitting to the duke’s peculiar brand of discipline surprises her with a
heady mixture of pleasure and pain. Eager to relinquish control of her messy
life, Liz soon craves the rough hands of Montague and his powerful, passionate
attentions. Can she succumb to the hot sting of his hand and the gentleness of
his kisses without revealing her true identity and darkest secrets? And what
punishment will she face when he realizes her betrayal?

Alyson
Chase writes historical romances that are just a
bit…naughty. She is a former attorney, and thought that her flair for dramatic
and sexy writing was seriously undervalued in her legal career. She also writes
under the name Allyson Charles.
She
lives in Northern California where the incredible weather and natural beauty so
far outweigh the overcrowding and congested freeways. Also, the food in the Bay
Area rocks.
If you
want to know when the next book is coming out, visit her at website and sign up for her newsletter.

“Look at me.” His voice was quiet. Kind. But no less commanding than when he gave orders to his steward. Or his dogs.
Her gaze rose over hard thighs, the fall of his trousers, the flat expanse of his stomach, and the wider expanse of his chest. She looked up until his eyes captured hers and held on. Her breath caught in her throat. His eyes weren’t the gray of unyielding stone anymore, but rather the shifting silvers and subdued greens of an ocean tossing in a storm.
“I don’t make a habit out of breaking anyone’s, anything’s, spirit.” Dropping to a squat, Montague ran his fingers under Reggie’s jaw.
The heat from his body, his sudden nearness, curled around Liz. She took a deep breath to calm her racing heart. But she was swamped with his scent, and her pulse ratcheted up even higher.
“Sometimes animals need to be molded so they can become their best selves. Guidance, a firm hand, training.” His breath bloomed across her cheek with every word. “My horse, Darkwing, has as much spirit as he did as a foal. I merely redirected it to productive channels. Now, he and I have a partnership. We each trust the other.” His lips quirked. “More so than I do most men.”
Digging his fingers into the soft fur at the back of Reggie’s neck, Montague gently lifted the pup. “Now if this fellow doesn’t wish to be molded that is his prerogative. He might not make the grade for a work dog at my estate, but he will make someone a lovely pet.”
Reggie yipped, and the duke lowered him to the ground. The puppy coiled around himself like a snake, obviously exhausted from his day. Montague kept his hand on the dog, his palm almost large enough to span Reggie’s entire back. He ran his long, tapered fingers slowly through the puppy’s coat, and Reggie gave one more sleepy yip before tucking his nose under his tail.
“You seem to have an affinity for the scamp.” Montague gently rubbed the tip of Reggie’s ear between his thumb and forefinger. Liz’s own earlobe tingled. “Perhaps you’d want him as a pet.”
Her heart twisted. She’d love to spoil a dog. But it wasn’t to be. And the duke should have known that.
“Where would I keep him?” She hated to do it. It would ruin the moment, these amazing few minutes when the duke spoke to her like she was a real person, an equal, not the hired help. She’d forgotten what it felt like to be able to sit without fear of violence or discovery. To not have every moment revolve around a job for Westmore, scraping together enough money for food for her and Amanda, finding enough coal to keep her warm at night.
This was like an afternoon of days past, when gentlemen treated her with respect and she wanted for nothing. She felt like her old self, if only for a moment. The decadence of it almost made her dizzy.
But being the old Miss Elizabeth Wilcox was a luxury she could no longer afford.
So she twisted the blade, just a little. Just enough to sting. “Mr. Todd doesn’t allow servants to have pets. And if Reggie followed me around on my duties I think he’d probably make more of a jumble than I could clean in a day.” Taking a deep breath, she clenched her stomach. “It doesn’t make sense for a chambermaid to have a puppy.”
And there it was. That small flicker. The stormy sea hardening back into granite. Montague had forgotten himself. Or, more accurately, forgotten her. Forgotten how low she was in relation to him.
Her lungs burned with the effort to keep her breathing steady. The reminder stung more than she’d expected. The duke would probably forget his momentary lapse in the time it took him to return to his house.
It would take her longer.
And she couldn’t keep forgetting who she was, why she was here. It hurt too much when reality crashed back in. So she dug the knife a little deeper into her side.
Picking up the sleeping puppy from her lap, she laid him next to Reggie. Standing, she brushed at her skirts, plucking an errant strand of fur from her apron. “Now if you will excuse me, Your Grace, I have some chamber pots I need to empty.”
Without looking to see whether she had shocked him, Liz turned on her heel and made her way back to the side door of Hartsworth. The servants’ entrance.
It wasn’t until she’d refilled Molly’s bucket and lugged it halfway up the stairs that she realized she’d forgotten to curtsy before leaving the duke. She could only hope her disgraceful chamber pot reference had distracted the man too much for him to notice.

2 thoughts on “Disciplined By The Duke by Alyson Chase”